As the ‘Anikulapos’, we are trained to accept death – Femi Kuti’s son reveals

Made Anikulapo-Kuti, son of Afrobeat singer, Femi Kuti, says he was trained to accept death.

The 22-year-old, who recently joined his father’s band as a bassist, said he is not afraid of challenging the status quo. 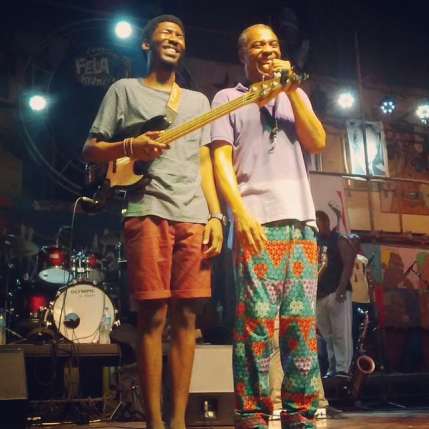 “It’s not that I don’t feel fear but there are very few things that scare me. One thing that you learn to accept growing up as an Anikulapo is to accept death and that’s the biggest fear. We accept that its a possibility to move on to something else after we die but nobody knows for sure,” he said in an interview with Pop ‘N’ Goss.

“That I will die not contributing to society and I will see my siblings and children suffer, that is a bigger fear for me. I fear things more than I fear death. So I am not afraid of challenging the status quo, what I am afraid of is making a mistake when I am doing it.”

According to Made, who is also the grandson of late Fela Anikulapo-Kuti, he got a place on his father’s band after the former bassist absconded few minutes before a show in the US.

“I thought I would spend the first year or two working on my own album, getting my things together but as I came back, the first thing that happened, the bassist in my dad’s band ran away so when it happened, I knew that it was an opportunity for me to play for one of the biggest bands out of Africa.”