SHAME! Nollywood Actress Nancy Isime Collapses At A Party From Too much Alcohol

Nollywood Fast rising actress and show host, Nancy Isime brought the roof down at her home when she held a thrilling house party hosting friends and colleagues over the weekend. the actres reportedly collapsed during the party due to too much intake of alcohol 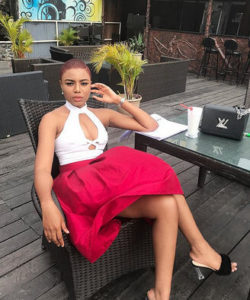 Nancy Isime is a Nigerian actress, model and media personality. In 2009 she won the Miss Valentine International beauty pageant, and began a career as an actress in the TV series Echoes in 2011. She has since appeared in several films and is known for presenting gossip show The Squeeze and technology show What’s Hot. In 2016 she replaced Toke Makinwa as the presenter of the popular show Trending on HipTV

Nancy Isime was casted alongside Zimbabwean born American actor, Michael Maponga, in the Norwegian movie.Speaking on the her appearance on the set, the actress and show host said, ‘I couldn’t be more thankful to be part of this amazing project. What an exhilarating experience! Shout out to every single person both behind and in front of the cameras. I look forward to spending more time with them all when we return to set.’The ‘Hire a woman’ actress left Nigeria on November 25, 2018 for the movie set, which has locations in different parts of Oslo in Norway that include, Nordstrand, Tøyen, and Bergen. The movie with a working title, ‘The Department of Applied Chemistry,’ has Maponga taking the lead role while Nancy is the female lead act.

Isime began a career as an actress in the TV series Echoes in 2011. She appeared in several films in 2014. Isime is also a television presenter, known for presenting gossip show The Squeeze, technology show What’s Hot and backstage segments of MTN Project Fame season 7. In 2016 she replaced Toke Makinwa as the presenter of the popular show Trending on HipTV