The Federal Government had disclosed that it has spent $22.216m out the $322m recovered Abacha loot on various empowerment schemes. The reason for spending the recovered Abacha loot it was revealed, was a “strategic approach to lift millions of Nigerians out of poverty.” This disclosure was made in Abuja on Thursday by the Senior Special Adviser to the President on Social Investments, Maryam Uwais while giving an account of the National Social Investment Programme (NSIP) of the Buhari administration.

She stated that the disbursement of recovered Abacha loot started in 2018 because the National Social Investment Office (NSIO) needed to sort out issues with the back-end and ensured it dismantled all identified glitches.
Maryam Uwais noted that “the data and parameters used were 2012 figures and occurrences; which neither captured current realities nor is consistent with information domiciled with the National Bureau of Statistics (NBS). The Social Investment Programmes designed to lift the masses out of poverty is anchored on four broad pillars which are the N-Power, Conditional Cash Transfers (CCT), National Home-Grown School Feeding and Government Enterprise and Empowerment Programmes (GEEP), each of the schemes uniquely targets different subgroups of Nigerians for empowerment; irrespective of religion, political affiliation, and social class.” 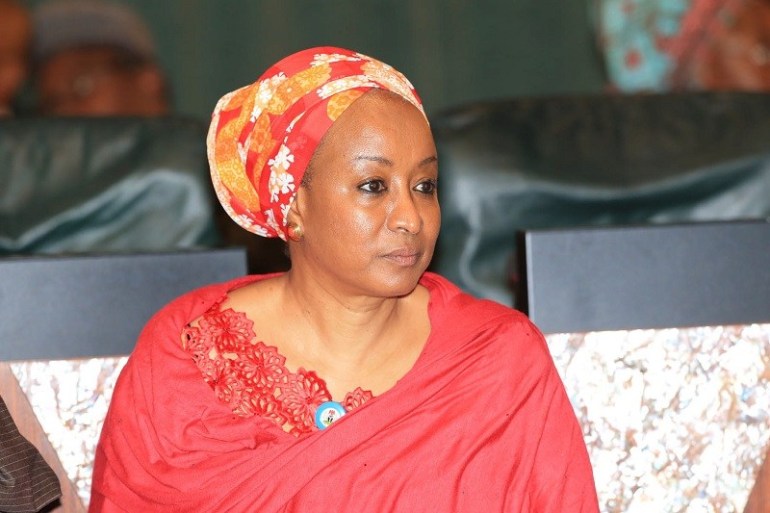 Under the N-Power initiative, Uwais said: “500,000 people spread across 774 Local Government Areas have been recruited to teach in public schools, act as health workers in primary health centres and as agriculture extension advisors to smallholder farmers in various communities. The government is about to commence the N-Power STEAM Junior programme which will engage pupils in 12 government primary and secondary schools (as a pilot) to learn, as part of their school curriculum, computer programming, graphics, animation, etc. This is in a bid to develop the knowledge economy, with an eye on the future.” On the National Home-Grown School Feeding Programme (NHGSFP), she noted that it was designed “to provide one nutritious, balanced meal for 200 school days in a year, to pupils in classes 1 to 3 in public primary schools to boost enrolment, increase the cognitive function in children and battle malnutrition. Nigeria is fast on its way to becoming the leader in Africa in NGHSFP by feeding over 9.7 million pupils and still counting. NGHSFP requires 94 metric tons of fish, 7,260,862 eggs and 767 cattle slaughtered for the pupils being fed. Fruits, vegetables and grains are part of the carefully thought-out balanced diet for all of the pupils.”

With regards to the Conditional, Cash Transfer Programme, the SSA it was designed to deliver timely and accessible cash transfers to beneficiary households, as well as build their capacities for sustainable livelihoods, through a meticulous selection process. With regards to the Government Enterprise and Empowerment Programme (GEEP), Uwais said that “the initiative seeks to provide collateral and interest-free financial support to businesses at the bottom of the financial pyramid. Funds for the programme are managed by the Bank of Industry (BOI). There are currently three GEEP products; FarmerMoni, MarketMoni, and TraderMoni. For the first two, funds between 10,000 to N350,000 are paid into the accounts of the successful applicants who belong to a registered cooperative or association (even if registered at LGA level), and have a bank account linked to a BVN.”

“For TraderMoni, however, trained enumerators go into the market and clustered business areas to register traders who fit the set profile; which include an obvious petty trade, a phone and has a verifiable place of trade (kiosk, table-top, spot, area of hawking). The registered traders are then processed for disbursement of a N10,000 loan. Upon repayment within six months, the beneficiary becomes eligible for a larger amount, at which point s/he must open a bank account, with a BVN. Since inception, BOI has made 1,681,491 loans available to successful applicants in all the States and the FCT. Repayments are made through selected agents, which in itself has provided payment opportunities, across the country”, she stated.