The best way to appreciate the scale of Aliko Dangote’s empire is to hitch a ride on one of his private jets. A half-hour after his Bombardier Challenger 605 takes off from Lagos Airport, it descends into a seemingly desolate area of Kogi State in central Nigeria, dusty fields and clusters of trees stretching to the horizon.

Suddenly a tangle of exhaust stacks, silos, and kilns pierces the sky to the left of the aircraft as Dangote Cement Plc’s Obajana plant comes into view. It’s already the biggest in Africa, churning out enough sacks of cement to fill 1,000 trucks a day. A fifth production line now under construction will make it one of the world’s largest.

The cement plant and its two sister factories in Nigeria have long been the bedrock of Dangote’s fortune, Africa’s biggest. But Dangote’s future—and, as he likes to say, that of the entire continent’s economy—lies to the south on the Nigerian coast.

About 40 miles east of Lagos, on more than 6,700 acres of former swampland bound by a lagoon and the Atlantic Ocean, contractors are putting the finishing touches on a fertilizer plant valued at $5 billion. Next to it, construction of a vast oil refinery—a $12 billion project—is under way.

If all goes according to plan, the complex will immortalize the 61-year-old Nigerian businessman as Africa’s most prominent industrialist, vaulting Dangote Industries’ annual revenue from $4 billion to about $30 billion, roughly 8 percent of Nigeria’s gross domestic product. Oil industry experts such as London-based CITAC have questioned the project’s timeline, citing logistical and financial challenges. But Dangote insists the refinery, which will be Africa’s largest, is on track. “By 2020 I will finally dispatch oil,” he says during a January interview at his Lagos home.

Despite controlling the world’s 10th-largest oil reserves, Nigeria has only four aging, inefficient state-owned refineries, leaving it almost wholly reliant on imports for its fuel needs. Dangote says his massive refinery could end that dependency and lift electricity generation in a nation plagued by blackouts: “It will change the entire economy of Nigeria.” 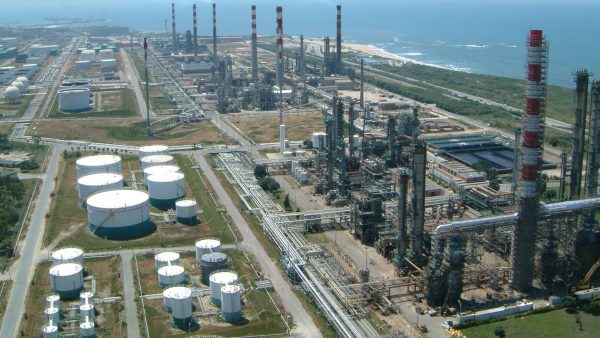 The fertilizer plant, which Dangote says will come online in a few months, will be capable of producing up to 2.8 million metric tons of urea a year. “It’s probably the largest-volume urea plant ever executed at one time,” says Alistair Wallace, head of fertilizer research at Argus Media in London.

Nigeria’s natural gas prices are the lowest in the world, meaning Dangote’s fertilizer will likely be profitable even in the competitive export market. “It will generate hard currency and bring in dollars. It will be a good look for the administration and for Dangote,” Wallace says.

Born into a wealthy Muslim family of traders in the north, Dangote incorporated his own business selling cement at 21. He shifted to manufacturing the building material in the 1990s, convinced his homeland, the world’s seventh-most-populous country, could meet its own demand for staples. Dangote factories churning out sugar, flour, and salt followed. A vertical integration push gave rise to other businesses, including oil, property management, packaging, and port operations.