Gracious David-West,  39 yea-old man, the suspect arrested by the police for killing at least seven women in hotels in Lagos, Owerri and Port Harcourt, has narrated how he carried out those killings. 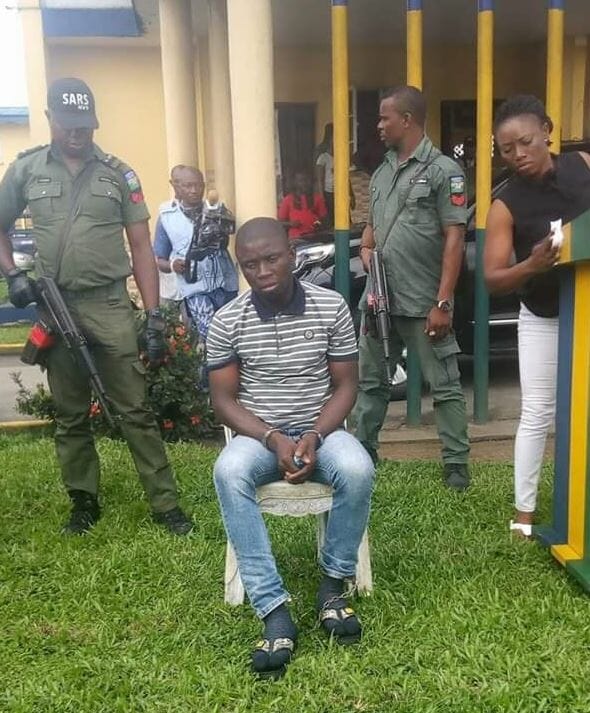 Following a CCTV footage that revealed his identity, he was finally caught on his way to Uyo, Akwa Ibom state.

Read his confession below as reported by the New Agency of Nigeria.

“So far, I’ve killed five girls in Port Harcourt; one in Owerri (Imo) and another in Lagos. I started the killing in Lagos.

“After I kill a girl, I collect her phone, and sell the phone at Waterlines and MTN office (areas in Port Harcourt).

Mr David-West, who hails from Buguma in Asari Toru Local Government Area in Rivers, further gave horrific details on how he murdered his victims in cold-blood.

The suspect, who did not betray any emotion, said he usually picked his victims from clubs and drinking spots.

“I take a girl into the hotel, we eat, make love and sleep. Later, I wake up in the middle of the night and put a kitchen knife on her neck, ordering her not to shout.

“After the girl relaxes, then, I will tear the bed’s pillow case and tie her hands and legs, so that she will not struggle. Thereafter, I strangle her,” he confessed.

“So, I collect their ATM pins, and after dawn, I go to ATM to withdraw money from the account. I usually use the money to get other girls.

“I don’t know what is making me to kill people. Immediately the urge comes, I kill, and after killing, I regret and feel sober. But later, I will still go and kill again,” he said.