Sexual abuse is a situation whereby even if the women say they consented to the act, it does not free the soldiers from the crime. These soldiers are in a position of authority and in a position where the women could hardly resist them. So, they had no right to touch any woman. An argument between a woman identified as Mrs Aniefiok Otobong Jumbo and men of the Nigerian Army Attached to 6th Battalion, Nigerian Army, Ibagwa, Akwa Ibom State, has reportedly culminated in the death of her husband, Mr Otobong Jumbo at Uta Ewa waterside, Ikot Abasi LGA on Tuesday, 26/3/2019.

She said; “When I bent down to defecate, I saw flashes of torchlights pointed at me, it happened to be men of the Nigerian Army on duty at Uta Ewa waterside They asked me to relocate to another point which I obeyed. They continued to point the torchlights on me. At that point I protested, which led to series of arguments.’That particular Soldier has been pestering me for sexual relationship, which I rebuffed, telling him I am a married woman.”

Mrs Jumbo said that while the argument lasted, people of the community had gathered to witness what was going on. Angered by the incident with the woman, two soldiers headed to the residence of the deceased which is within the waterside area and forcefully dragged her husband to the scene of the argument at the waterside. According to the wife and some eyewitnesses, Mr. Otobong Jumbo was severely beaten, tortured and manhandled. He was hit by the soldier with their gun butt which led to his collapsing into the river.

According to eye witnesses, had the soldiers allowed them to rescue him at that point, his life would have been saved. But they didn’t allow. It was when the soldiers saw that Otobong was no more moving in the water, they fled the scene. At this point he was rescued and with the help of the men of NNS Jubilee of the Nigerian Navy who arrived later, the deceased was rushed to the Naval Clinic. After much effort, he was referred to Emmanuel Hospital, Eket. Due to the critical condition he was first taken to Betany Hospital, Ata Udo Usung, Ikot Abasi LGA where the doctors on duty cerfied Mr Otobong Udo Jumbo dead. His corpse was deposited at Ikot Abasi General Hospital Mortuary.

The family and the community are therefore calling on all relevant authorities to conduct a thorough investigation into this heinous crime and bring Perpetrators to book. The deceased left behind 2 wives and seven children. Some of the soldiers fingered in the crime are S/Sgt Tagun Yakubu Banu and Sgt Austin Lamun Dauda of the Nigerian Army. This case of sexual abuse is a serious disloyalty on the part of the soldiers and a failure of the system. It is very bad. It is morally wrong and professionally unethical. In addition, if these soldiers are identified, they should be dealt with. It is a very painful scenario. The suspected soldiers should be apprehended and if found culpable, dismissed. If some of them are punished, it would serve an example to others. 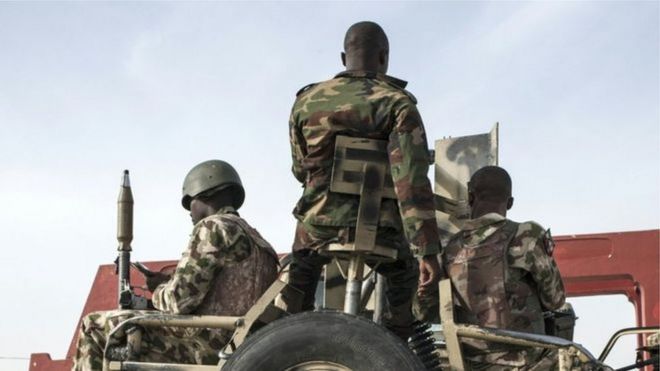