Sunday’s eviction in the ongoing BBNaija 2019 witnessed mixed fate for two house mates – Esther and Tacha. Tacha who’s been a constant name on eviction list week in week out got saved again by her fans while Esther got sent home, becoming the 13th housemate to leave the reality TV show house.

Just as Biggie revealed, it was a not a fake eviction night as at least one housemate had to leave the house and unfortunately for Esther, she had to leave her boyfriend, Frodd behind as she gathered the lowest votes and so had to end her quest for the N60 million star prize.

Esther has been evicted pic.twitter.com/1x5g7Bi8f4

Recall that some weeks back, the nomination rounds took a different turn as Biggie introduced one of his numerous twists dubbed the ‘Nomination Challenge’. According to the rules of the challenge, the entire losing team would automatically be up for possible eviction. At the end of the rounds, the Legends lost and the entire team, with the exception of Khafi who is the current Head of House, had to face the possibility of being evicted. 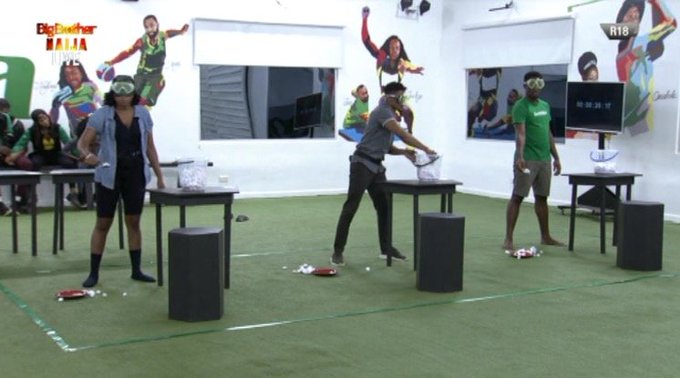 Frodd, Tacha, Sir Dee, Venita, Omashola and Esther were nominated for possible eviction this week. Luckily for Omashola, he was saved by Ike whose veto power enabled him to replace him with another. Unfortunately for Cindy, she was picked to replace Omashola and so had to join the losing team to face the possibility of leaving the show.

Luckily for the other nominated housemates that survived the eviction show, they were able to gather enough votes from their fans to ensure their stay in the house for at least another week. This brings the number of evicted housemates to a total of 13 with Jackye, Gedoni, Enkay, Joe, Jeff,  Thelma, Nelson, Tuoyo, Kim-Oprah, Ella, Avala and Isilomo already out of the show.

Do you think tonight’s eviction was fair? Tell us what you think in the comment section.